A federal jury in Tucson, Ariz., has acquitted a humanitarian aid worker who was charged with harboring a pair of migrants from Central America after Border Patrol agents reported seeing him provide food and shelter in the Arizona desert.

It was the second time federal prosecutors had put Scott Warren of the faith-based border aid group No More Deaths on trial.

A jury deadlocked during his first trial on whether offering food, water and shelter to two young men who illegally crossed the U.S.-Mexico border makes Warren a criminal. This time, the jury unanimously agreed that he should be found not guilty of harboring undocumented immigrants — prosecutions that have been on the rise under President Trump’s hard-line immigration policies.

“The government failed in its attempt to criminalize basic human kindness,” Warren said after the verdict was read Wednesday.

Border Patrol agents arrested Warren last year after conducting surveillance on a humanitarian aid station known as “The Barn,” some 40 miles north of the border.

The two migrant men, Kristian Perez-Villanueva, 23, and José Arnaldo Sacaria-Goday, 20, crossed the border on foot after walking through the desert for two days and two nights. They found their way to the Barn, where Warren gave them food, water and shelter for three days, according to court documents. On Jan. 17, 2018, at around 5:40 p.m. local time, Border Patrol agents and Pima County Sheriff’s deputies drove to the Barn and arrested Warren and the two migrants.

Warren, a 37-year-old geography teacher from Ajo, Ariz., and others with No More Deaths carry jugs of water, food, first-aid kits and other supplies for migrants traversing the Arizona desert.

His lawyers have argued for years that their work is not illegal because they are offering humanitarian assistance to desperate border crossers regardless of legal status, a perspective the jury affirmed in fewer than three hours of deliberations. Warren’s legal team also maintained that his aid work is in accordance with his religious beliefs that instruct him to help those in need. 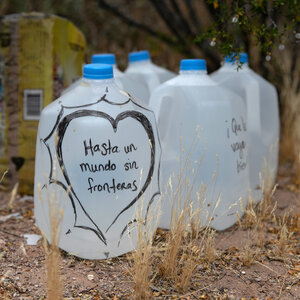 Federal prosecutors told the jury that Warren was complicit in the migrants’ dangerous and illegal journey across the border, not just by providing shelter but by helping them avoid a checkpoint to stay out of the reach of Border Patrol agents.

“Although we’re disappointed in the verdict, it won’t deter use from continuing to prosecute all the entry and reentry cases that we have, as well as all the harboring and smuggling cases and trafficking that we have,” said Michael Bailey, the U.S. attorney for Arizona. “We won’t distinguish between whether someone is harboring or trafficking for money or whether they’re doing it out of a misguided sense of social justice or belief in open borders.”

Warren still faces a single misdemeanor charge in a separate case in which he is accused of driving into a national wildlife refuge and leaving gallons of water for migrants. He had also been charged with littering and driving in a restricted road inside the refuge. The littering count was dismissed, and Warren was found guilty of the vehicle charge. He is set to be sentenced in February.

“The verdict is a sharp and welcome rebuke to the administration’s ongoing effort to criminalize compassion — and marks a major victory for all of the humanitarian workers willing to risk their own lives to save those of others,” Morn said.

About @SmaugDragon 205 Articles
At the bottom of a deep gravity well, on the surface of a gas covered planet going around a nuclear fireball 90 million miles away.